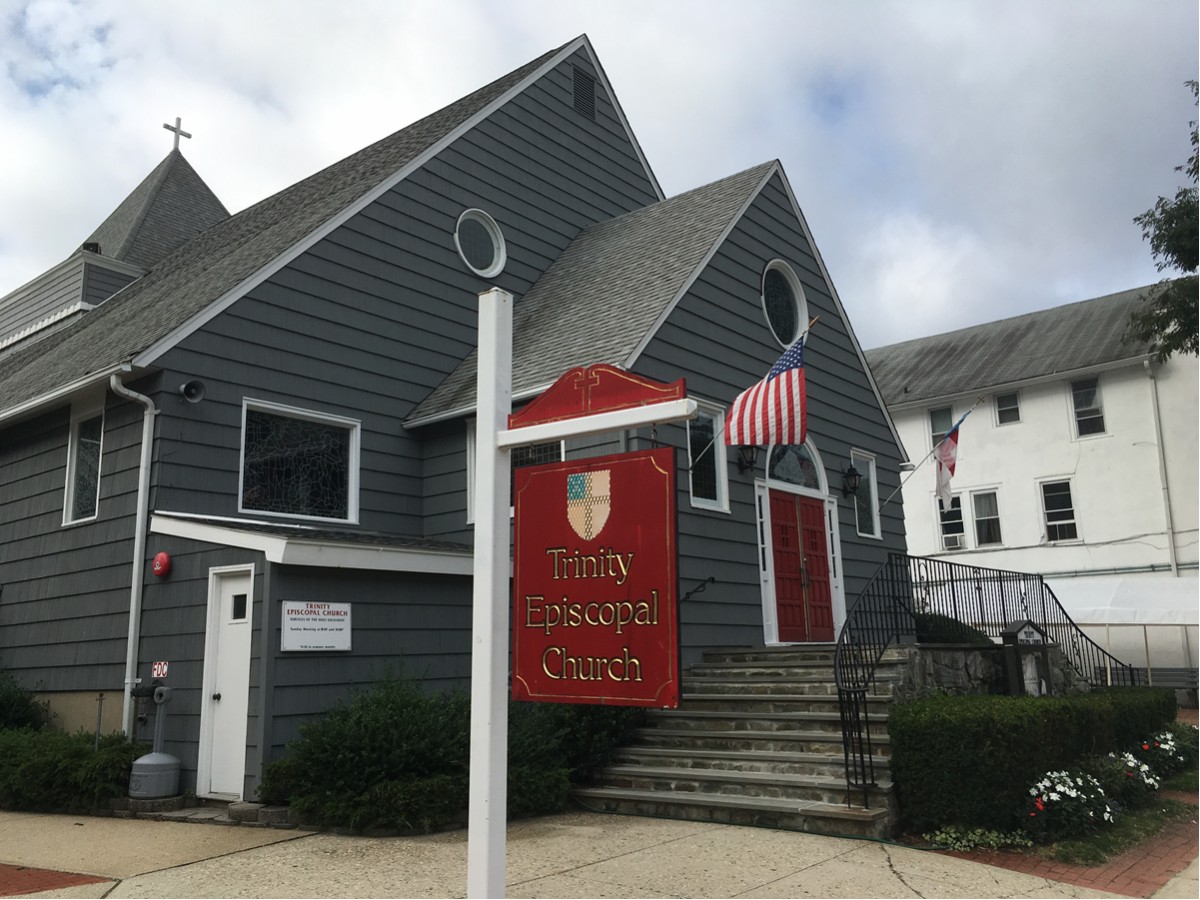 In 2006 three round Tiffany-created windows were removed for restoration as the wall behind the altar was rebuilt due to water damage. Somers Stained Glass Studios in Deer Park cleaned and restored the windows. The process was reported in the parish’s quarterly publication, The Chimes, as follows:

“The first stage in the process was to completely remove all the old lead caming from the windows and to clean each piece of glass by hand. Tiffany windows are built in layers, often using two or more layers of glass, so a tracing was taken of each layer of glass in the window as it was deconstructed. Any cracked or broken pieces were replaced by matching colors from Somers’ vast array of vintage glass, which is kept on hand in large storerooms. The new lead caming was made on site, as it is not commercially available. The innovative construction of Tiffany windows often sandwiches two or more layers of glass together in order to create the rich and subtle transparencies that appear in the windows. Our angel windows are particularly unique in that they are four or five layers thick in places, which required a great deal of extra time, expense and artistry to create.”

The Tiffany windows that were restored also had faces that were originally hand-painted in glass enamel and then fired in ovens so that they would permanently meld into the glass. The “Christ” window, which has the richest background and glows when the sun strikes it during the morning service, was most noticeably improved with deeper color and greater opacity. That window was donated in memory of Arthur Alexander Brown who was born March 25, 1822 and died August 8, 1879. The other two round windows are of angels with halos and wings. The one on the top left side of the church, holding a bunch of Easter lilies, was created in memory of Norma McKinney, who died July 10, 1901. The inscription below the window reads, “Of Such Is The Kingdom of Heaven”. The round window on the top right side of the church, an angel holding a Palm tree branch, was donated in memory of Elizabeth Roy, who died Sept. 10, 1901. It reads, “I Am The Resurrection And The Life.” The other Tiffany windows include “Jesus in the Garden of Gethsemane,” the middle window on the left side of the church facing the Altar. It was donated in the memories of Hannah C. Knight, who died August 19, 1899 and Emma V. Beebe, who died March 24, 1906. The window of St. John the Apostle, the first window on the right, facing the Altar, also has the meticulously painted face of a Tiffany. The figure is seated, writing on a scroll, and has a sandaled foot peeking out from under his robe. The window was donated in memoriam for John Ward Perrott, who died June 25, 1863 and Ann Maria Perrott, who died October 31, 1887.

The stained glass window of Jesus as the Good Shepherd, which is now enclosed in the hallway of the church office building and not accessible to natural light, appears to have been created early in the history of the church. It was dedicated in memory of William Hobart Longbothum, who was born April 16, 1824 and died May 7, 1877. However, it was not created by the Tiffany Studios.

Many of the other stained glass windows date back to the 1950s and 1960s. They include the scene of “The Good Samaritan,” and Jesus at the Sea of Galilee, the Virgin Mary, and Jesus as a child teaching in the Temple in Jerusalem.

Go to this address  https://www.youtube.com/watch?v=Viym8u3kabU    to view a video presentation about Trinity’s windows that was created by parishioner Matthew Reuschle. 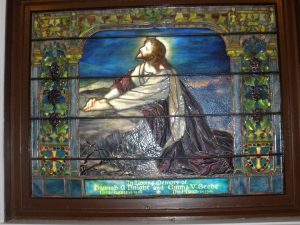 Jesus in the Garden of Gethsemane … 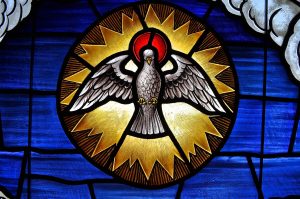